Yes, things are clear and I am somewhat blue. I mean, I am and I’m not. I predicted these results. They certainly make sense at least, unlike so many other times where we went to hell and back and everything seemed SO CERTAIN only to get this brand of result.

This time is a little different.

Only having one round of troops into battle I knew going in that the odds were not ever in my favor here, but along with everyone else my stupid brain reminds me about the age old adage that “it only takes one” … and I still held out some secret hope that this could actually happen to us. I attempted the double reverse fake out jinx tactic where I tempt fate to prove me wrong by giving me what I actually want!! Fate apparently, is on to the double jinx.

So I’ve been trying to strategize my next move. Are we still on treatment break? Do we try naturally? Do we take a month completely off? What?…. Let’s check the old calendar and see what’s up? Now, if Aunt Flo shows up in the next day or two like she’s supposed to that’ll park my next fertile window…. aw crap.

Amazing hubby landed an awesome new job this week! It’s been part of the reason that last cycle was so unimpressive. It really is difficult to “try” to get pregnant when you have many other things going on, and I get that. Being that we had already declared a bit of a break I didn’t force the issue like I normally would. FERTILITY OVER EVERYTHING is usually my stance, but this month I just kinda let it happen- or not in this case which is fine. It was very much worth it! I’m so excited for this new opportunity for hubby, it’s so nice to see him happy about something again.

New job starts November 1st and the first day wil be served in San Francisco smack dab in the middle of fertile window. Shit. The entire window he will be gone. There’s no acceptable scenario where I piggyback and go along on the trip- even if I could swing it logistically how awful for him would that be to be starting a new job, meeting people at headquarters and also having to be on call for doin’ it??? Yah no… the answer to my query has now been revealed.

It’s not ideal. Sure. It’s not part what I want certainly, but at this point I can look at this and MAKE it the plan for this cycle. I can deal with any awful thing, if it’s part of the plan. It’s the unexpected curveballs, and left field nonsense that derails my lovely plans and expectations that really make my head spin. So, for at least the immediate now – this month we’re off.
We are REALLY off.

For the first time in almost a decade I won’t have to worry about any of this. I won’t have to try to fake out my lady parts or the universe. I won’t have to remind myself to have hope- cause it only takes one. No charting, forced intimacy, symptom spotting, no driving myself crazy and NO nonsense.
It’s going to be a good month for distraction, which I should have plenty of thankfully, but it will not break me to really BE on break. 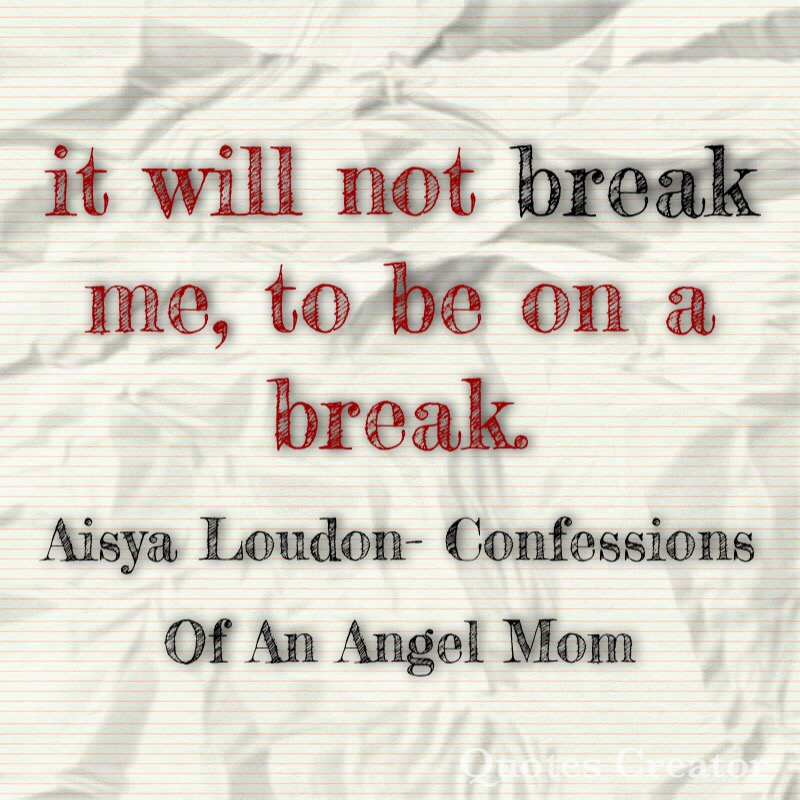 Published by Confessions of an Angel Mom

View all posts by Confessions of an Angel Mom